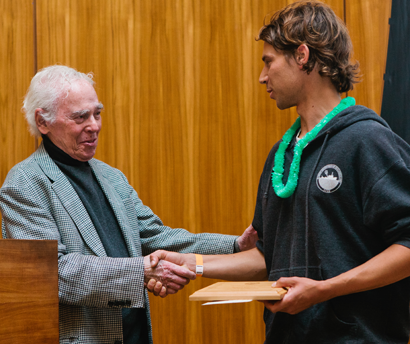 Roland Kersten, a Scripps Institution of Oceanography at UC San Diego graduate student, has been selected as the 17th recipient of the Edward A. Frieman Prize for Excellence in Graduate Student Research, established in 1996 to honor the eighth director of Scripps, Edward A. Frieman, on his 70th birthday.

The prize is given annually to honor Scripps graduate students who have distinguished themselves in their field as measured by the quality of a publication during the previous year. Kersten’s paper, “A Mass Spectrometry-guided Genome Mining Approach for Natural Product Peptidogenomics,” was published in the October 2011 issue of Nature Chemical Biology.

“The paper describes a new methodology for the identification of small molecules, such as peptides, that might have medicinal properties or important ecological functions,” said Kersten. “The molecules are isolated from marine organisms, for example. The new method then combines an analytical technique with genome sequence analysis to rapidly characterize the peptide natural products isolated from the organism.”

Kersten says the new approach will allow for many more small molecules to be characterized at one time than previous methods. The approach will guide the discovery of new molecules with medicinal properties, and pioneer a path for the study of peptide natural products.

Kersten, born in Berlin, Germany, completed his undergraduate coursework in biochemistry, and spent nine months studying under Dr. Pieter C. Dorrestein at UC San Diego. His current advisors, Bradley S. Moore, professor of marine biotechnology and medicine at Scripps, and Pieter C. Dorrestein, a professor at the Skaggs School of Pharmacy at UC San Diego, co-authored the paper. Kersten was formally recognized at the Scripps Day celebration on June 15, 2012.

The 2011 recipient of the Frieman Prize was recent Scripps graduate Cassondra Williams, recognized for her contributions to research on emperor penguins published in a paper titled, “What Triggers the Aerobic Dive Limit? Patterns of Muscle Oxygen Depletion during Dives of Emperor Penguins,” in the February issue of The Journal of Experimental Biology. The paper also received the 2011 Outstanding Paper Prize from the journal.

As part of her research, Williams developed a system to measure muscle oxygen depletion in diving emperor penguins. She is currently a postdoctoral fellow at UC Irvine. “It’s so nice to be awarded something like this so early in my career,” said Williams.